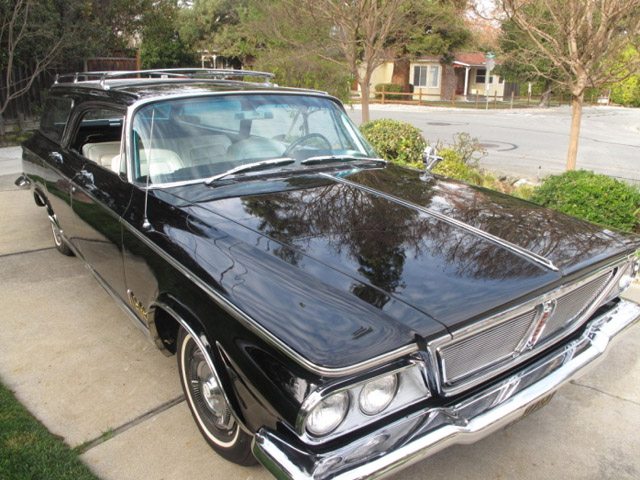 Here is a one owner 1964 Chrysler New Yorker 9 passenger hardtop found on Hemmings with a price of $25,000 that is in original and near pristine condition. Seeing the beautiful pillarless design make one wonder why this was the last year of the hardtop wagon. Loaded with the luxurious options of the day, the New Yorker’s white interior is roomy and looks fantastic with the black exterior. The headliner and plastic bows are described as new as is the black plastic steering wheel. The rubber weatherstripping is soft, supple and crack free. The factory air conditioning is said to blow cold and all the gauges are also in working order.

Nothing is harder to maintain than black paint but the original factory black exterior is a testament to how well the New Yorker has been maintained over the years. The chrome, mouldings and exterior script is also original and appears to be near perfect.

Mechanically the powerful New Yorker has a 413ci wedge engine matched with a pushbutton Tourqueflight transmission. The owner says the car still has plenty of power for highway cruising and he even will use it to transport his boat with ease.

END_OF_DOCUMENT_TOKEN_TO_BE_REPLACED 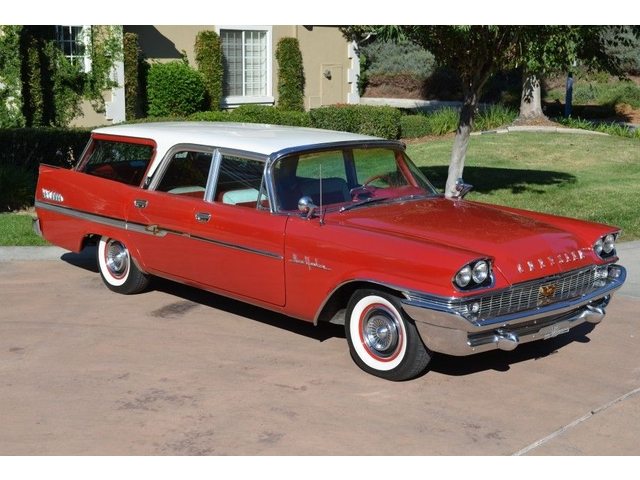 Found on Ebay is this top of the line 1958 Chrysler New Yorker loaded with options including factory air, cruise control, full power windows and seats and 9 passenger seating. With only 428 New Yorker Town & Country wagons manufactured and only 14 known to remain this could be the nicest one in existence.

With the rust problems that plague most late 50’s Mopars, a lifetime spent in Arizona and California has spared the wagon of the typical rot. A fully documented restoration was done on the car that began in 1998.

A 392 Hemi, 342 HP V8 powers the car which is paired with a 3-speed Tourque Flight pushbutton transmission. Torsion bar suspension helps give the car a smooth road ride.

Considering what it would cost to restore one today and the rarity of this loaded wagon, the $44,800 BIN price seems very fair.

END_OF_DOCUMENT_TOKEN_TO_BE_REPLACED 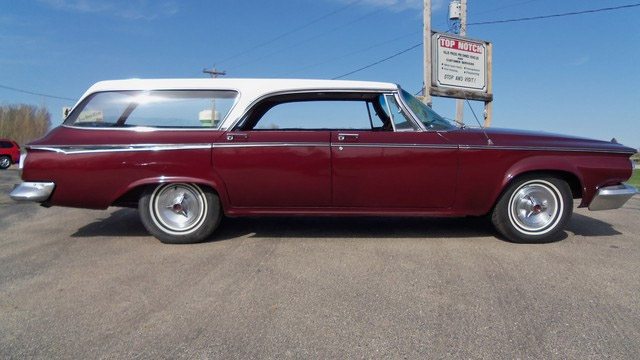 1963-64 Chryslers have always seemed to be forgotten years for Chrysler, but I’ve always found them to be handsome cars especially the hardtop styling on the station wagons. This 1964 Chrysler Newport found on Collector Car Ads for $7,995 is a clean example that comes with a very rare floor shift 3 speed manual. A good amount of work has been put into this car including refurbishing the electrical system, the brake system and the exhaust. The engine and transmission have been rebuilt as well as the rear window assembly. Cosmetically the car has been repainted and the interior re-upholstered. A 3-ring binder full of documents, photos and manuals support the work that has been put into this wagon.

END_OF_DOCUMENT_TOKEN_TO_BE_REPLACED 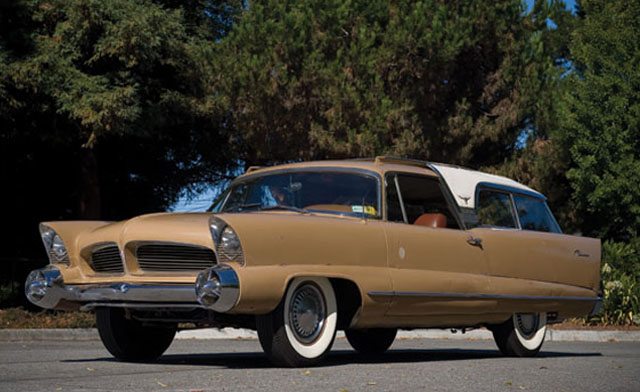 Take 1950’s Virgil Exner styling and combine it with Americas passion for Westerns and this is what you get. This one and only 1956 Chrysler Plainsman concept found on ebay was on the car show circuit for 1956 and ended up in Cuba with a banker until Castro took over. Luckily it made it out of Cuba safely- can you imagine if this car stayed in Cuba? The car had advanced styling cues and mechanical functions including a rear facing power flattening  back seat, step plates that came out of the rear bumper, a spare tire that fit under the rear fender and a gas cap under the left rear taillight, that sucks in under vacuum to expose the filler cap for filling the car with gasoline. As part of the Western motif the interior seats were finished in “unborn calf skin” which begs the question what’s the difference between “unborn calfskin” and “newborn calfskin”?

END_OF_DOCUMENT_TOKEN_TO_BE_REPLACED 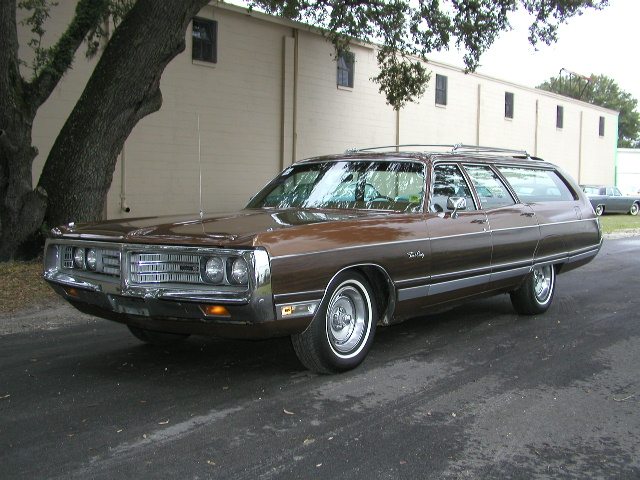 Not the biggest station wagon ever produced but this 1972 Town & Country found on Hemmings seems to go on forever.  Chrysler’s top of the line wagon came with a 440 engine, power windows, dual power seats. power locks and power brakes. The owner says the original owners manual, warranty book and build sheet are also included. The odometer read 80,000 miles and this car appears to be a well maintained survivor. Even as nice as it is the asking price of $16,900 seems a little steep but when was the last time you saw on of these that wasn’t beat to hell or a complete rust bucket?

END_OF_DOCUMENT_TOKEN_TO_BE_REPLACED

Think station wagons aren’t hot? Take a look at these station wagons we posted 6-8 years ago that are worth a lot more now. 1960 Mercury Commuter: This ‘Summer Rose’ hardtop sold for $8,610 in 2009. Easily worth twice that now. 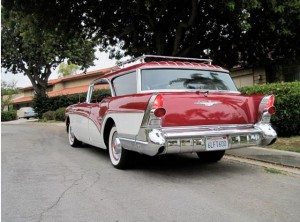 Big and bold, the Century Caballero was Buick’s top of the line wagon for 1957. Caballeros were only built in 1957 and 1958, a victim of the recession and a price tag that was a hefty $600 more than the lower priced Rivera and Special wagons.  This beauty found on Hemmings is just 99 mile […] 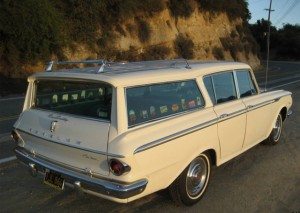 Sensible and economic as Ramblers and their owners tended to be, this well preserved Cross Country was owned by the head lifeguard form the city of Santa Barbara form new until his death in 2008.  Having walked to work most of his career, the Rambler has amassed only 49,00o miles on the odometer in it’s […] 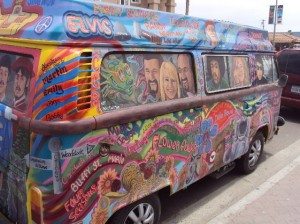 Sure to draw plenty of attention and the perfect vehicle for a road trip to Burning Man is this 1977 Volkswagen Vanagon Hippie Bus. I saw a similar van at a rest stop several years ago and the attention the car was getting was unlike anything I’ve ever seen before. Found on Ebay and naturally […]